DISCLAIMER: John Nutting as author and Growing Awareness Pty Ltd as publishers of this web-site do not dispense or recommend medical or psychiatric advice, nor prescribe the use of any technique as a form of treatment for any diagnosable medical or psychiatric conditions. Any such action should only be taken either directly or indirectly on the advice of a physician or a qualified therapist. 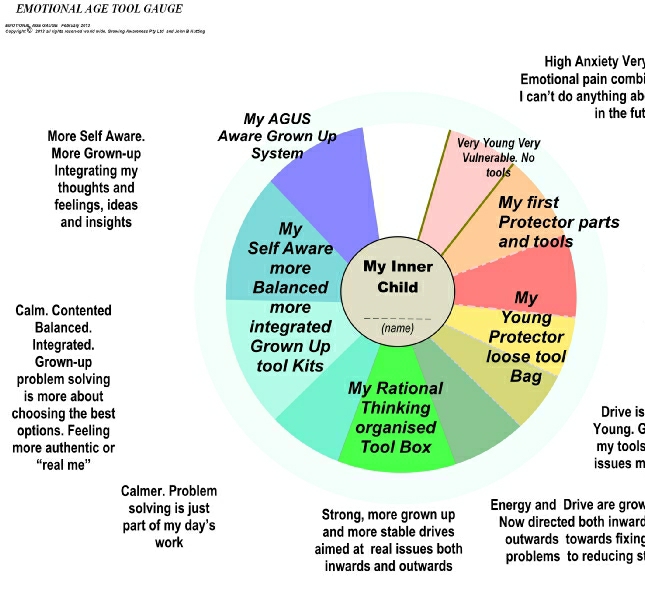 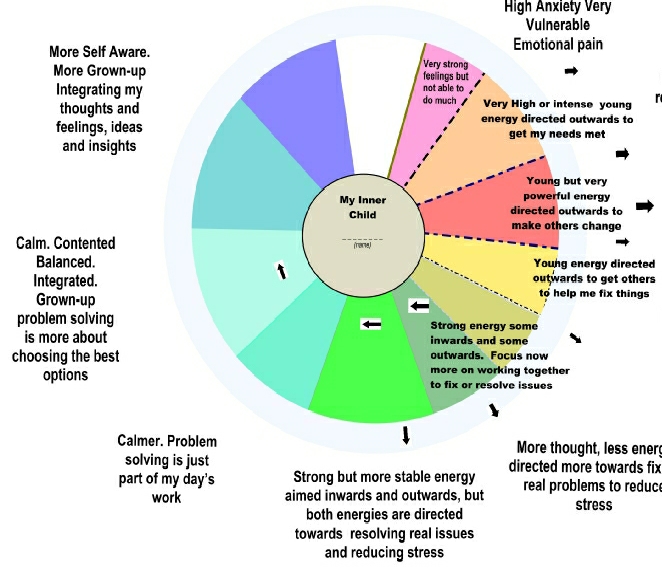 Below:  Comparing the different stress and energy levels as you move around the guide and the outcomes or results you can expect when you are in different  sectors.

Identifying and recognising your own core beliefs and belief patterns

At this point, you may not even know if you have core belief problems or patterns, but something brought you to this web site. For a start does this sound a bit like you?

1. Introduction - What is a negative Core belief? and

Why it is not easy to recognise your Core beliefs

Examples of negative core beliefs - is yours on this list?

This book explains where core beliefs come from and how a simple process - core belief balancing will help you avoid those automatic or triggered over reactions.

One of the most difficult problems I face is when I over-react, those times when I find myself triggered into an automatic response that ends up causing the problems. Afterwards I ask myself "Why did I over-react like that?" and usually "I wish I hadn't over-reacted but I couldn't stop myself!" Or I blame the other person for "making me" react the way I did and I lose another friend.

If this sounds at all familiar then it's going to be well worthwhile reading on....

Over-reacting is one of the more obvious signs that tells you that you may have got yourself automatically 'hot-wired' to one of your hidden core beliefs. You have been triggered. Over-reactions like this are closely linked to core beliefs and are described as the 'F' reactions.

You are probably already familiar with two of the most common reaction patterns "Fighting" and "Fleeing". But almost as common are many other 'F' reactions like "Staying but Folding" or "Forget the Whole Thing" or Freezing.

Your F reaction patterns are the easiest part of the whole process to look at, so they are the best place to start work.

3. Getting out of the old reaction patterns

You can't change the belief that causes the over-reaction but you can change the reaction patterns themselves. Your triggered F reaction is the one part of the whole process that you can observe clearly particularly if it's happening over and over again.

At this point there are a couple of warnings about how not to go about it. It's no good trying to "change" beliefs or or get rid of them totally. I will explain as I go why that cannot happen, and why there is a far better way that works. First let's see if I can explain a bit about what core beliefs are, where they come from, what they do. and why they do it.

Fable - The case of the stolen self-esteem

Examples of negative core beliefs - is yours on this list?

4. Getting to know Your Core Beliefs

Where did they come from? Why they came into your life? Strange as it may seem as soon as you begin appreciating the way they helped you as a child they begin to lose some of their intensity.

At this point you can start to understand what is underneath your individual reaction patterns.

Why you react when a core belief is triggered

Become aware of what is happening inside you, and how much of this is being driven by your negative core beliefs.

Identify your own core beliefs

Increase your self-awareness (and figure out what's holding you back)

Make a list of the things that Trigger You?

Identify your own Core Beliefs using do-it-yourself worksheets at home.

Save a fortune on therapist's fees and do a better job yourself.

The worksheets will help you to understand:

* What you can do instead - balance the negative and positive beliefs

Five Gifts from Your Old negative core belief Honouring the ways the old belief helped in your childhood.

Making changes in your life using the methods described in these pages is great , but only if you feel ready to change. And that includes self assurance about change itself. It's better not to make changes until you feel really confident about them and their effect on your life. The methods we describe here do work, but the changes can be fast and powerful. It's important to understand what is going to happen before you begin. Then you can make your changes with confidence.

Back to Home page